A short story by Jo-Anne Mason

“AARF...AARF...AARF...AARF...AARF...Help, someone help me,” Axe barked and struggled to stay above the water. He thought he was the big dog; he thought he was smart and that he knew everything. That's why he jumped in the water just moments earlier with his beach friends Amy and Roger watching.
“Don’t do it!” Roger had warned, “You think you're big, but you're just a pup! You don’t know nothing about the sea.”
Amy just smiled. She wasn’t mean spirited, she just liked to see foolish things and figure out how they would turn out.
“AARF, AARF, really guys I need help, I can’t swim that good, pleeaaaaseeee come help me!” he cried and they could tell he really meant it.
There was much scrambling around as the pup, Roger, and the kitty, Amy, looked around for a way to help poor Axe. But alas, there was nothing. Not even a stick and even if there was, how could they get it to him? They had no human family to look out for them. They were beach critters and had to look out for one another.

“Wait!” Roger cried, “I see something over there near the water's edge.”
They both ran over for a look. It was a small raft, perhaps left by a family who had gone to lunch.
“Let’s get it,” Amy yelled. “This raft should do the trick. We can just push it a bit and reach Axe in no time.”
So push they did and at the last minute, the two critters jumped into the raft being careful not to touch it with their claws. It was filled with air; it might burst. Sure enough, the raft, now floating, was making its way towards poor, sinking Axe. He started swimming best he could towards the raft.
“AARF, AARF, I'm coming,” he called as the little raft headed his way.
It seemed like forever, but they finally met and realized the next problem. How would they get Axe onto the raft?
The struggle began and what a struggle it was! It's very difficult for dogs and cats to pull somebody out of the water (especially another dog) but try they did and finally, using their tails and Axes teeth, gently they pulled him out of the water and into the raft.
“That was quite a thing” Amy cried as she tended to her slightly damaged tail. “I realize you were in a situation Axe, but really did you have to bite so hard.”
Axe laughed, “Oh, come on Amy, you know I didn't bite that hard and it was just for a minute, give me a break! I was drowning here! And Roger you don't have much of a tail! It was difficult to even get a hold of it.”
They were all pretty stressed about almost losing Axe to the sea, so everyone had a good laugh as they sat back in the raft trying to figure out how in the world they were going to get back to the beach.

Then, without any warning at all, a giant wave crashed into the dinghy and drove them further out to sea. This was a very bad situation! What in the world were they going to do now?
“Guys, we've really got a problem!” Roger cried over the crashing waves. "Look how far away the beach is now.” And it kept getting smaller and smaller.
Amy was not happy. She really wasn't fond of the water to start with and now the land was quickly going out of sight. She started to cry. What were they going to do? It was a sad state of affairs.
Suddenly, right next to the boat, a large gray triangle came out of the water then another and another.
“What in the world is that?” Axe cried.
“AARF, AARF AARF AARF1” both he and Roger yelled. “Go away go away! What are you? Why are you near our raft?”
With that, three very strange creatures (the likes of which they had never seen before) popped their heads out of the water.
“Fa Fa Fa!” they all cried and they just kept saying it over and over again.
“Well I guess their name is Fa. What kind of a name is that?!” Axe laughed. “Hi, guys, I don't suppose any of you know how we can get back to the shore?”
The dolphins (yes, they were dolphins) all shook their heads at the same time, shaking and shaking and saying fafafafafa over and over again.
“Well, I guess that means yes, so what do you think's going to happen next?” Amy said.
The dolphins knew exactly what to do. There was one dolphin on each side and one in the back. They started guiding the raft back to the shore. It was amazing! They were pretty far out, but the dolphins took no time at all to get them very close to the shore.

“Oh my goodness! They have saved us!” Roger cried with glee.
With that the dolphins released the raft, jumped in the air and disappeared from sight into the waves.
“Bye bye, friends! I hope we see you again,'' cried Amy. “They were really nice and they helped us out so quickly! Dolphins are super smart and good friends to have for sure,” said Axe.
The raft headed directly for the shore. The three looked up and noticed there was a group of people standing just past the waves lapping on the shore. It seemed like two big people and three small people. They were all waving and jumping up and down.
“Uh oh!” they all cried. "We're in for it now! They probably think we stole their raft!"
(Which, when you think about it, they really did, but it was for a good cause.)
But instead of getting angry, all of the people ran down to the edge of the water and pulled the raft out, gently lifting the two pups and the kitty. The people made nice sounds which made everyone feel much better.
“Oh my goodness! We're so glad you are okay! We just left the raft for a minute to go for lunch and then saw that you were out in the middle of the ocean with no way to get back,” one of the people said.
The three smaller people were holding the pups and the kitten and gently stroking them.
Axe whispered to the others, “These humans are really nice. I'm glad they are not angry about us taking their raft.”
They all agreed that they got very lucky, but it was going to get much better than that in a matter of minutes. The largest human in a deep voice said to the family that it looked to him like these little doggies and kitty didn't have a home and perhaps they should take them home with them. The rest of the family jumped for joy and since dogs and cats are very good at understanding feelings, they knew it was a good thing and they were happy, too. Tails were wagging all around.
Then they went back to the beach bar and got everybody a little snack and that sealed the deal. Axe, Amy and Roger (and thanks in a big way to Fa and family) were super happy to be going to a new home. The beach was nice, but sometimes they got hungry and when it rained they didn't really have anywhere to go.
So, when you see the AARF raft, think of it as a lifeboat for dogs, puppies, cats and kittens that need a good home. 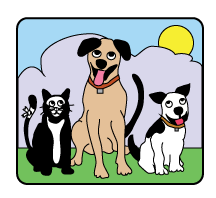